In User Interface design, intuitive simplicity is always a main goal. This often expands to the number of clicks a user will need to reach a certain feature, with the believe being the fewer clicks, the more efficient and simple the interface system. The “Three-Click Rule”—that nothing on a website should be more than 3 clicks away—acted for years as a guideline for websites and even user interfaces for electronic devices.

The number of clicks, though, is not the best barometer of usability. Focusing too much on minimizing clicks can result in creating additional problems due to clumsy solutions. This tends to happen when targeting the number of clicks overshadows other key elements of successful User Interface design.

In reality, the number of clicks is less important than users A) knowing where they are when completing a task, and B) feeling as if the time required to complete the task is minimal. For example, a feature that may require 4-5 clicks to access while users are guided by the system will be less annoying than having that same feature available with one click, but so difficult to find that it takes twice as long to access it. Time annoyance often trumps click annoyance.

This is not to say that the number of clicks plays no role in a positive user experience. Certain work environments such as healthcare will absolutely require specific features to always be immediately accessible with one click. Also, users are savvy enough now to understand when additional clicks to reach a desired feature are unnecessary.

However, studies have shown that very few people give up after three clicks. It is important to avoid sacrificing that intuitive simplicity for the sake of keeping the number of clicks as small as possible. 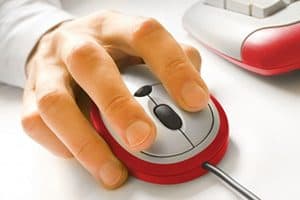